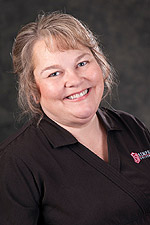 REDDING, Calif. - “This isn’t about me – it’s about God,” Simpson University nursing student Patty Brown said, as she began to share her story. “He held my dream and allowed it. I want people to be given hope.”

Brown, 52, of Redding, is one of 200 students graduating Saturday from the university and one of 27 earning their bachelor of science in nursing degree.

Since January 2012, she has been a full-time student, taking classes and doing clinical rotations at area healthcare facilities.

It’s been a sacrifice of time and finances. But it’s also the culmination of a desire she’s had since childhood, when she watched doctors help her sister overcome club feet through multiple surgeries, braces and casts.

“I knew I wanted to do something in the healthcare field,” she said.

Brown took college preparatory classes in high school, planning to study nursing at Oregon State University. Then, in April of her senior year, her parents, brother and sister-in-law were killed in a plane crash, leaving only Brown and her sister.

With her support base gone and her life dramatically changed, Brown shelved her nursing dream.

“God gave me so much grace,” she said. “He only gave me as much as I could handle each day.”

Brown came to Redding to attend what is now Shasta Bible College, where she met her husband, Ron. They have three sons, Bradley, Byron and Erik. In the ‘90s, Brown went to work as a school librarian, spending 14 years at North Valley and Redding Christian schools.

When her youngest son was a senior in high school, doors started opening for Brown to go back to college. Thinking it was too late for her to go into nursing, she began an online healthcare management degree.

“But God kept prompting me,” she said. She got over her hesitations about returning to an undergraduate classroom and enrolled at Shasta College. And she heard about a brand-new four-year nursing program at Simpson University.

“I would go online and look at pictures and think, ‘I wish I could do that,’” she said.

When she found out she was very close to qualifying for the program, things fell into place quickly. Brown took more prerequisite courses over the summer and fall, was accepted in October, qualified for financial aid, and started as a full-time nursing student in January.

“I had so much fun being a student,” she said. “My cohort just absorbed me – my age did not matter.”

Though she does not note it, Brown is one of nine members of her graduating class selected for membership in Simpson University’s new Honor Society of Nursing; she also serves as one of the student representatives on the society’s board. In September 2013 she spoke at the groundbreaking dedication of the university’s new Science and Nursing Center.

All of these threads—Brown has always been drawn to the life metaphor of a tapestry woven by God—came together in a powerful way for her on her final day as a nursing student, April 15.

On her 10-minute drive to class, a song by ‘70s Gospel singer Andrae Crouch came on the radio. It was a song she used to listen to during the dark, shattered days after the plane crash.

“Give them all to Jesus…shattered dreams, wounded hearts…And He will turn your sorrows into joy,” the song says. “He never said there’d only be sunshine, He never said there’d be no rain, He only promised a heart full of singing about the very thing that once brought pain.”

"It just hit me,” Brown said. “This is huge. God just brought back my dream. He just fulfilled it.”

And then she realized the next day would mark the 35th anniversary of her family members’ deaths.

“I just broke into tears,” she said. “My dreams were shattered, and I had a broken heart. But God is faithful no matter what your circumstances.”

It’s a message and way of life that Brown hopes to communicate through her nursing work—she is applying to North State hospitals and would like to eventually work in oncology or intensive care.

“I hope I can carry this experience into my nursing,” she said. “To carry forward the grace and hope that has been given to me.”


Simpson University is a Christian university offering undergraduate, graduate, and teaching credential programs. Academic programs include ASPIRE, a degree-completion program geared toward working adults in the north state. Simpson’s newest programs include bachelor's degrees in Spanish and nursing, and master’s degrees in counseling psychology and organizational leadership. Learn about our new Science & Nursing Building at simpsonu.edu/snbuilding. For information about the university, or to arrange a campus visit, call 1-888-9-SIMPSON or visit simpsonu.edu.