REDDING, Calif. - Simpson University hosted a community appreciation banquet Oct. 4 to thank members of the North State for their support during the university’s first 25 years in Redding.

The event, held at the Holiday Inn on Hilltop Drive, included dinner; music by the 40-member Simpson University Chorale; special recognitions; prayers by former President Francis Grubbs and Board Chair Betty Dean; and speeches by Dr. James Grant, who served as Simpson’s president from 1993 to 2006, and Interim President Robin Dummer. University Advancement representative Roger Janis served as the master of ceremonies.

Representatives from the offices of state Sen. Ted Gaines, Assemblyman Brian Dahle, and Congressman Doug LaMalfa offered their congratulations to the university. 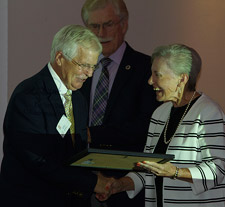 The following individuals and firms received certificates of appreciation:

Lou Gerard was the chief executive officer of the Greater Redding Chamber of Commerce in 1989, when Simpson University moved from San Francisco to Redding. His efforts to bring a four-year university to Redding were instrumental in Simpson’s move.

Maurice Johannessen, former state senator, was mayor of Redding in 1988 and 1989. He met with college officials in San Francisco to share the benefits of moving to Redding.

Dr. Francis and Peggy Grubbs – Dr. Grubbs, left, was the president of Simpson University from 1987 to 1992 and oversaw the relocation of the college and the construction of a new campus.

Dr. James and Hazel Grant – When the Grants moved to Redding, Simpson had 400 students and three buildings. By the time they left, it had grown to more than 1,100 students, with seven buildings added. Under Dr. Grant’s, right, leadership, Simpson University was named Outstanding Nonprofit of the Year in 2005.

Dr. Larry and Debbie McKinney - Dr. McKinney served as president from 2006 to 2013. Under his leadership, the university gained stronger financial footing and continued its expansion, including the launch of a nursing program and plans for a Science and Nursing Center.

Sharrah Dunlap Sawyer Civil Engineering – John Sharrah, John Dunlap, and Frank Sawyer were engineers in the design of the initial university campus. (Frank Sawyer passed away in 2013; his wife, Donna, attended the banquet to accept the award on his behalf.) 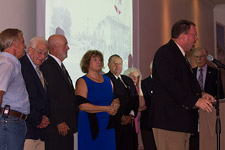 Dr. Dummer also expressed appreciation for partnerships with the city of Redding and Shasta County and for the support of those in business, education, healthcare, nonprofit work, and public service. He shared about future growth possibilities for the university, as well as some of the challenges facing higher education.

In his speech, Dr. Grant reflected on the strong partnership that exists between Simpson University and the city and county. When the college moved to Redding, officials knew they would need community support.

“They never said no,” he said. “Despite our frailties and the things we struggled with, we found a ready partnership.”

Simpson University also has worked hard to enhance its home community, Dr. Grant said. He cited three areas that directly impact the North State: the ASPIRE degree-completion program, from which 3,400 North State adults have graduated; the School of Education, which has helped 2,400 teachers get credentialed and participated in the impactful Parkview neighborhood tutoring project with Redding police; 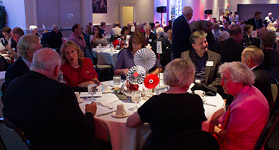 and the School of Nursing, which helps registered nurses earn a bachelor’s degree and offers a four-year bachelor of science in nursing.

He thanked the community for welcoming Simpson University 25 years ago and for its continued support.

“We have found a home in Redding,” he said.

Photos by Matthew Murnan. To view captions, click on photos.

Simpson University, established in 1921, is celebrating its 25th year in Redding, Calif. In October 2014, the university dedicated its new Science & Nursing Building. Simpson is a Christian university offering undergraduate, graduate, and teaching credential programs. Academic programs include ASPIRE, a degree-completion program geared toward working adults. Simpson is expanding its online course offerings, including degrees in psychology and organizational leadership. For information about the university, or to arrange a campus visit, call 1-888-9-SIMPSON or visit simpsonu.edu.